Check out my interview on .NET Rocks! – TDD on .NET and Java with Paul Mooney

For a brief overview, please refer to this post.

We’ve provided our WorkerDrones with a means to determine an appropriate method of transportation by inspecting any given RobotPart implementation. Now WorkerDrones may select a TransportationMechanism implementation that suits each RobotPart. But we have yet to implement the actual logic involved. This is what we’ll cover in this tutorial. Look at how eager the little guy is! Let’s not delay; he’s got plenty of work to do. 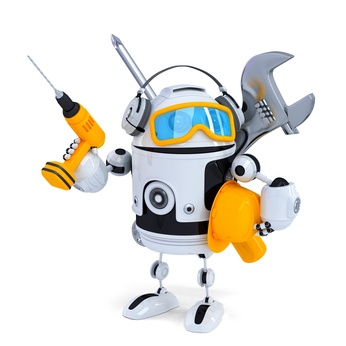 Once again, here is our narrative:

“Mechs with Big Guns” is a factory that produces large, robotic vehicles designed to shoot other large, robotic vehicles. Robots are composed of several robotic parts, delivered by suppliers. Parts are loaded into a delivery bay, and are transported by worker drones to various rooms; functional parts such as arms, legs, etc., are dispatched to an assembly room. Guns and explosives are dispatched to an armoury.
The factory hosts many worker drones to assemble the robots. These drones will specialise in the construction of 1 specific robot, and will require all parts that make up that robot in order to build it. Once the drone has acquired all parts, it will enter the assembly room and build the robot. Newly built robots are transported to the armoury where waiting drones outfit them with guns. From time to time, two robots will randomly be selected from the armoury, and will engage one another in the arena, an advanced testing-ground in the factory. The winning robot will be repaired in the arena by repair drones. Its design will be promoted on a leader board, tracking each design and their associated victories.

Let’s look at what exactly happens when we transport a RobotPart.
First, the WorkerDrone needs to identify the RobotPart that it just picked up, so that it can transport the part to the correct FactoryRoom. Let’s dive right in.

First, we need to keep track of the FactoryRoom where we’ll offload the RobotParts:

First of all, what can we tell about the difference between both implementations? Both contain private properties, but our C# implementation is explicitly bound to a FactoryRoom object. Our Java implementation, on the other hand, seems to be bound to the letter “E”.

“What’s that all about?”

The difference in implementations can be explained by discussing Generics. Essentially, Generics allow us to define an action, like a method, without defining a concrete return-type or input parameter – instead, we define these in concrete implementations of our abstraction. At this point, rather than go off-topic, I’ll provide a link to a thorough tutorial on this subject in C#.

In a nutshell, the difference in implementations comes down to a personal preference – I prefer Java’s implementation of Generics over C#’s, specifically Java’s support for covariance and contravariance. Again, I’m happy to follow up with this offline, or to host a separate post on the subject, but for now, let’s keep going.

Let’s look at our Java implementation of transportMechanism:

Notice our Generic implementation of factoryRoom and robotPart map to armoury and weapon, respectfully.

I’ll cover more about Generics on request. For now, let’s co back to our design.

Here is a breakdown of what’s happening:

OK. Now our WorkerDrone has entered the FactoryRoom. It should now offload its RobotParts via the OffLoadRobotParts method above. Here’s what’s happening:

“Why the safeguard? Can’t we just explicitly call the EnterRoom method before calling OffLoadRobotParts?”

Yes, but let’s offer another layer of protection for consuming applications. After all, if a developer forgot to ensure that a WorkerDrone enters a room before offloading RobotParts, the system would crash. Even if we implemented counter-measures to prevent this, our WorkerDrone would effectively dump its payload somewhere in the Factory. 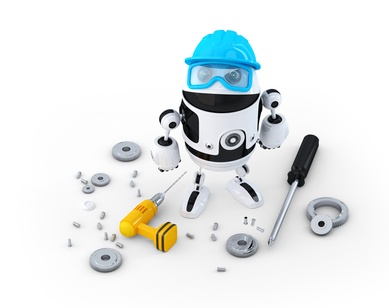 What do you expect me to do now?!?

Notice out first pair of Asserts. We’ve transported the RobotParts from WorkerDrone to FactoryRoom, and simply assert that both components contain the correct number of RobotParts. Next, we assert that our TransportMechanism has selected the correct FactoryRoom instance; Weapons go to the Armoury, Assemblies to the AssemblyRoom.

There are 2 reasons for this:

The next tutorial in the series will focus on returning our WorkerDrones to the DeliveryBay, and outlining the structure of RobotBuilders.