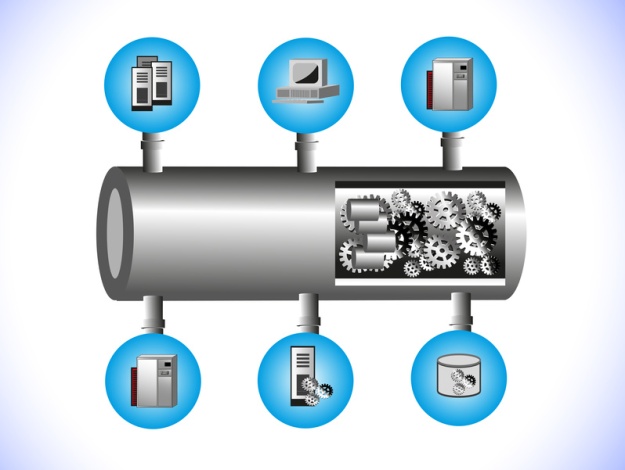 I’m often asked how to design and build a Microservice framework. It’s a tricky concept, considering loose level of coupling between Microservices. Consider the following scenario outlining a simple business process that consists of 3 sub-processes, each managed by a separate Microservice:

First, let’s expand on the previous tutorial and actually implement a simple Microservice-based application. The application will have 2 primary features:

Both features will be exposed through Microservices. Our first task is to define the Microservice itself. At a fundamental level, Microservices consist of a simple set of functionality:

Anatomy of a Microservice

Consider each Microservice daemon in the above diagram. Essentially, each they consist of

Let’s design a simple contract that encapsulates this:

Each Microservice implementation should expose this functionality. Let’s start with a simple math-based Microservice:

Establishes a connection to RabbitMQ. Remember, as per the previous tutorial, we need only a single connection. This connection is a TCP pipeline designed to funnel all communications to RabbitMQ from the Microservice, and back. Notice the RabbitMQConsumerCatchAll implementation. Here we’ve decided that in the event of an exception occurring, our Microservice will catch each exception and deal with it accordingly. Alternatively, we could have implemented RabbitMQConsumerCatchOne, which would cause the Microservice to disengage from the RabbitMQ Queue that it is listening to (essentially a Circuit Breaker, which I’ll talk about in a future post). In this instance, the Microservice is listening to a Queue called “Math”, to which messages will be published from external sources.

Our core business logic, in this case, multiplying an integer by 2, is implemented here. Once the calculation is complete, the result is dispatched to a Queue called “MathResponse”.

There are several moving parts here. How do we test this? Let’s extract the business logic from the Microservice. Surely testing this separately from the application will result in a degree of confidence in the inner workings of our Microservice. It’s a good place to start.
Here is the core functionality in our SimpleMathMicroservice (Functions class in Daishi.Math):

Introducing a Unit Test as follows ensures that our logic behaves as designed:

Now our underlying application logic is sufficiently covered from a Unit Testing perspective. Let’s focus on the application once again.

How will users leverage our application? Do they interface with the Microservice framework through a UI? No, like all web applications, we must provide an API layer, exposing a HTTP channel through which users interact with our application. Let’s create a new ASP.NET application and edit Global.asax as follows:

We’re going to run an instance of our SimpleMathMicroservice alongside our ASP.NET application. This is fine for the purpose of demonstration, however each Microservice should run in its own context, as a daemon (*.exe in Windows) in a production equivalent. In the above code snippet, we initialise our SimpleMathMicroservice and also establish a separate connection to RabbitMQ to allow the ASP.NET application to publish and receive messages. Essentially, our SimpleMathService instance will run silently, listening for incoming messages on the “Math” Queue. Our adjacent ASP.NET application will publish messages to the “Math” Queue, and attempt to retrieve responses from SimpleMathService by listening to the “MathResponse” Queue. Let’s implement a new ASP.NET Controller class to achieve this:

Navigating to http://localhost:{port}/api/math/100 will initiate the following process flow:

In this example, we have provided a HTTP endpoint to access our SimpleMathMicroservice, and have abstracted SimpleMathMicroservice’ core logic, and applied Unit Testing to achieve sufficient coverage. This is an entry-level requirement in terms of building Microservices. The next step, which I will cover in Part 2, focuses on ensuring reliable message delivery.

14 thoughts on “Microservices in C# Part 1: Building and Testing”